Hum, Croatia: The Smallest of Treasures

Hum, Croatia. a mini near-perfect medieval hill town, has been penned the smallest city in the world. Explore this tiny wonder and all it has to offer with us. 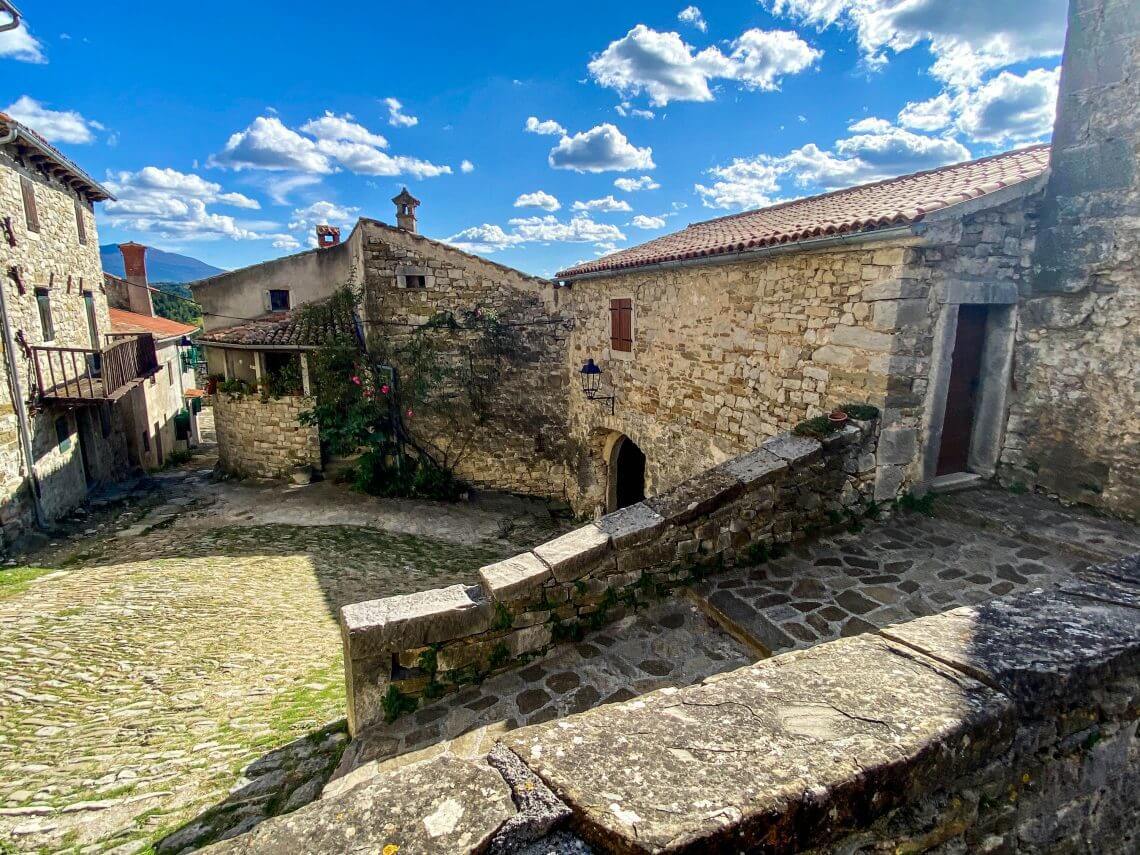 “If you cannot do great things, do small things in a great way”

Full of Charm and Rich in History

On the spectacular Istria Peninsula in Croatia, it was another castle hunting day. Our destination, Hum, Croatia.

It had been a successful day so far, but the road became a bit concerning as we headed to our next castle. Driving down what appeared a private dirt road, at times single lane, we passed homes where people gave us looks as if to say, “Are you lost?”. We started doubting our Google maps, which has been our stalwart on all our trips. Once off the dirt road, we found ourselves climbing a curvy mountain road within a dense forest with no signage or towns. Close to abandoning the road, we pushed forward. Google maps deserved our faith.

Then suddenly, at the top of the hill, Hum emerged. As our goal was the castle, we were surprised to learn as we approached the entry gate that we were about to visit the smallest city in the world, based on population. That title did cause us to worry; would it be a tourist trap?

But there was a castle there which was our original goal so we could ignore the touristy side if needed. We had learned from our castle hunting treks that wonderful castles could be found hiking through farmers’ fields, deep within thick forests, in the middle of a river, or on a sandy beach. The search is often as fun as the reward at the end.

This time it wasn’t just the castle that made the trip worth it; this tiny village that was brimming with charm had us captivated. It may have helped that the views alone were stunning.

Is it really that small?

Hum, pronounced Hume, is reputed to be the smallest town in the world with a population of 30 based on the 2011 census. Though not officially noted in the Guinness World Book of Records, it seems that is the case, nonetheless. The village operates as a whole city with a mayor, elections, and administration facilities.

Located in the center of the Istrian Peninsula, it is technically a settlement of the greater town of Buzet. The city is 300 feet long by 90 feet wide and has only two streets. On those two streets, there are a total of 20 buildings. It sits on top of a hill at over a 1000 foot elevation with sensational views of the dense forest and expansive valley.

Records recognize Hum as far back as the 12 century.

The Legend of Hum

As with many medieval towns, there is a legend that explains their existence. The story goes that the Giants that were building the towns in the Mima River valley had some remaining stones. Not wanting to leave the few remaining stones unused, they built the miniature fortress city of Hum.

Planning a trip to Croatia? Check out our Croatia Travel Guide by clicking here

Hum, Croatia in the Middle Ages

This medieval city was fully walled at one time, and all the homes were built within those walls. Much of that wall remains. It is a bit unusual that no homes were built outside of this tiny town, but as small as it was, it likely was their best chance for defense. There is a double door main gate with cooper door shields and handles adorned with Giogoltic script. There is also a castle, watchtower, and two churches: St Jerome that was built in the 12th century, and the Assumption of the Blessed Virgin Mary, which was built in 1802 in the place of a previous church. The churches are small and worth a visit.

St Jerome has beautiful frescos to enjoy. It also is adorned with some of the oldest examples of ancient Croatian Glagolitic writing from the Middle Ages on its walls.

For those who like to hike, there is a fascinating 2-mile hiking path between Hum and the village of Roc called the Giogolitic Alley. The path has many large stone sculptures dedicated to the ancient Croatian script. Each stone sculpture represents a letter of the old alphabet, which is reported to have been used until the last century.

How often do you get to hike an alphabet trail!

How can this be an actual city?

Hum has a sitting government with annual elections that occur on June 11th of each year, known as the Day of Hum, where the men in the town gather in the City Lodge engraving votes on a wooden stick. Yes, the men, who have maintained the tradition that only men can vote.

The village also contains an administrative and public affairs facility.

The day we visited was gorgeous and quite warm for late October. Due to it being a weekday, we were one of just a handful of people.

We felt we had Hum to ourselves.

In a town so small, we expected there would not be much to see or do. That turned out not to be the case. There is the castle, museum, two churches, lovely cobblestone streets to stroll, the hike to the hill town of Roc along Giogolitic Alley, or you can sit on one of the wooden benches on the edge of town to watch the sunset.

Of course, there is always shopping and grabbing a bite to eat.

Several quality shops, taverns, a wine bar, and a restaurant sit on the two streets that make up Hum. Many local delicacies can be sampled for free in the lovely little shops that grace this town. One shopkeeper suggested we try their local champagne beer. She set us up on this quaint little table outside overlooking the village and beautiful valley while we enjoyed this impressive brew. Loving both beer and champagne, it was quite the perfect blend. (See the pic in the photo gallery below)

Champagne beer, though, is not what made Hum famous. As small and out of the way this town is, it has deep traditions and cherished products, most specifically Humska Biska, a traditional Istrian brandy made with mistletoe and herbs.

It makes an excellent souvenir too!

Other local specialties you will find in the shops are homemade Istrian delicacies such as truffles, cheese, olive oils, wine, honey, sausages, and varied flavored Rakija’s. When given a chance, never pass on trying the truffles! One of our personal favorites from this region.

Want to learn more about the food of the Istria region, especially truffles? Check out our post on Croatian Cuisine. Click here.

Spolier alert, we loved it!

Now when you are known for such a unique product as Mistletoe brandy, a festival would be in order to celebrate it. Each year in October, Hum holds the Grappa Festival, where they showcase their local specialty brandy. Producers from all over the region come to display their craft and seek to win the big prize.

The day we were visiting was the week before the festival. We wish we could have stayed for it, but we were going to be halfway down the west coast of Croatia by the weekend!

Getting to Hum, Croatia

The area has a rich history dotted with incredible hill towns, medieval castles, and glorious countryside. Hum is one of many beautiful destinations to visit in the area. Therefore, we found having a car provides a unique chance to wander off the beaten path and explore such treasures.

Visiting Hum would take only a few hours, at most, of your time, even with stopping for lunch. A car would offer the chance to do a greater exploration of the area.

During the tourist season, there are bus tours that do stop in Hum. Taxi and Uber are always an option but could be pricey, and getting one to take you back could be a challenge.

Hum is two and half hours from the Croatia capital Zagreb. It could be a possible day trip but would make for a long day. Most people will stay in some of the closer bigger cities such as Opatija (where we were staying), Rijeka, and Motovun are easy drives. Though we seem to have taken the rougher route ourselves, there are better roads to take to reach Hum.

Want to spend the night in the smallest city in the world?

To our surprise, we saw signage for some small vacation rentals in town. Some were in the few modern buildings within the city walls, and some were in the ancient structures.

Of the few accommodations available within Hum, they appear to be apartments or rooms within homes. Booking.com seems to have the most complete list. There are also nice options close by but outside the town itself. Check out the options by clicking here.

With the controversy surrounding Air BnB’s and such, it would be fascinating to hear how the few villagers here feel about this. Based on their hospitality, I may expect they enjoy having a guest or two to stay the night.

An adventurous path led us to a charming village that was much more special than the Venetian castle we first sought.

Hum is a picture-perfect ancient village and so much fun to photograph!! Joelle may have stopped every three steps to take another pic. The cobblestone streets and ancient buildings take you back to days gone by. The landscape that surrounds it, which includes some vineyards, is breathtaking.

There is a presence in this tiny town that speaks to the pride of its few residents. The welcome is kind and the warmth genuine. We so enjoyed the people we had a chance to chat with. The residents have preserved the ancient authenticity of Hum while keeping the village livable for its residents, including several children in their count.

It was one of our many memorable stops because of the magnificence of Croatia as a whole.

In the end, we came for the castle but found the town the best part. How often do you get to visit the smallest city in the world?

Hum, Croatia has their town webpage, but it is pretty bare-bones, check it out by clicking the link below.

Check out our other Croatia Posts Hum, Croatia: The Smallest of Treasures Ancient ruins, a bustling vibrant city, and a magnificent coastline, Pula has it all. Croatia: The Hidden Gem of Europe

Croatia is the hidden gem of Europe on the gorgeous Adriatic Sea. Discover this… Croatia food was one of the highlights of our trip. We take you on…

Do you have a question for us or have a comment? Edinburgh Castle: The Crown of Edinburgh