Eze, France, is a picturesque hilltop medieval village renowned for its breathtaking panoramic views of the Mediterranean, French Riviera, and Italian coast. There is a spectacular exotic garden at the top of the village that prides itself in its extensive collection of exotic plants from all over the world interspersed with 15 lovely sculptures of "Earth Goddesses". 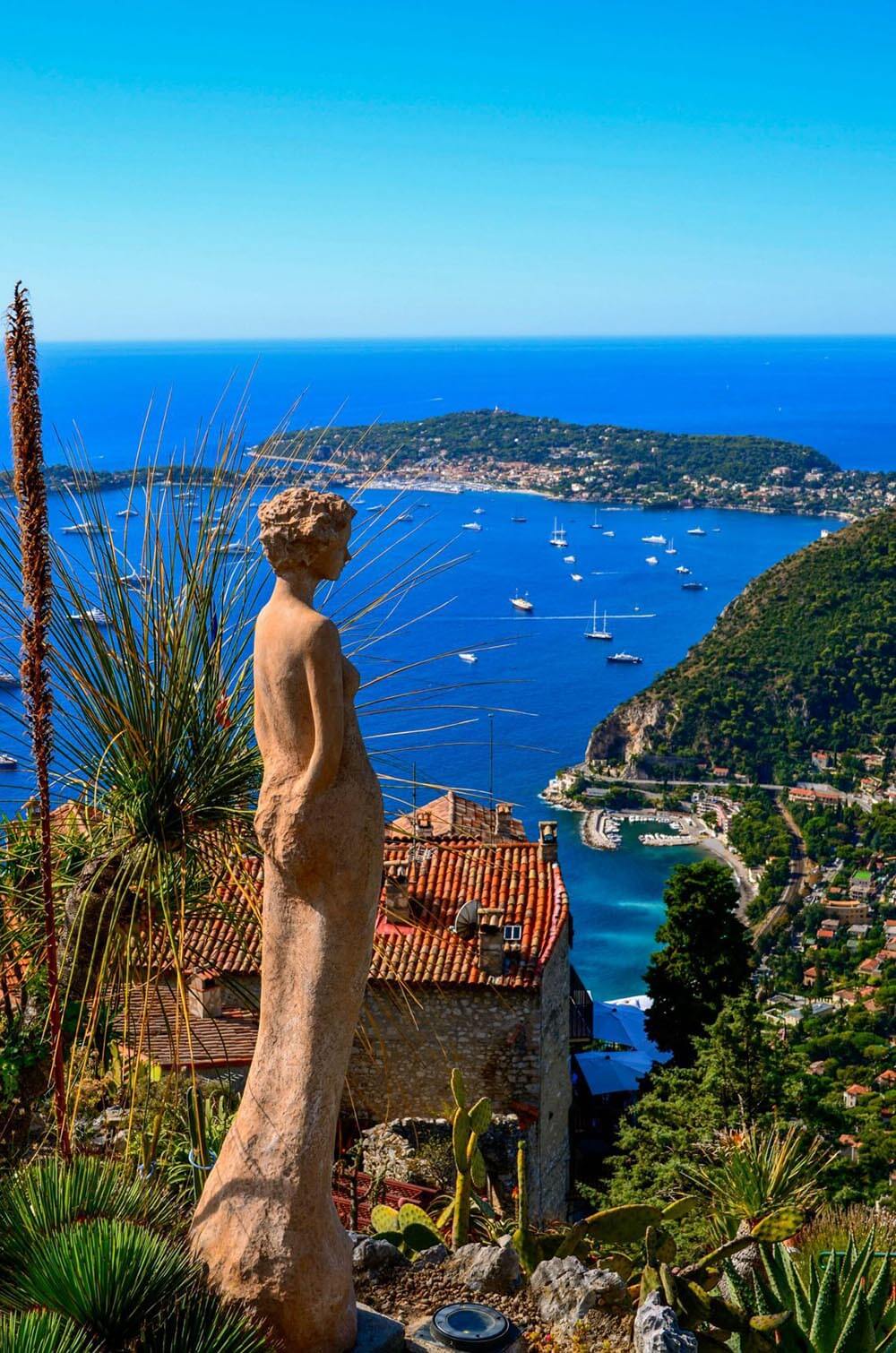 And you shall know

Jean-Phillipe Richard for the statue of Margot

After visiting Italy, next on our itinerary was Monaco. I was on an extended European adventure which began with a gathering of friends from my gourmet cooking club. We spent a fantastic week in Tuscany in the hilltop village of Montisi. However, one week was not nearly long enough after traveling so far. I invited my sister-in-law Lisa to join me in Italy with plans to continue to France to visit family. She suggested making a stop in Monaco where she had a standing invitation to visit from a friend. Neither of us had ever been. It was the perfect incentive to go!

We focused our research on the immediate area of Monaco. Our plans included the Royal Palace, Monte Carlo, and the gorgeous beaches of the Cotes d’Azur. Upon our arrival, our kind and gracious hosts suggested we make a trip to nearby Eze, France, to visit the medieval village and botanical gardens. It turned out to be one of the highlights of our whole trip.

A perfect example of always allowing flexibility in your plans and to seek guidance from the locals.

A bit about Eze, France

Eze, France, which dates back to the 1300s, is located between Monaco and Nice, France. If coming from Monaco, it is about a 5-mile trip. It takes about 10-15 minutes by car but also is reachable by train and bus. The drive itself is quite beautiful as you climb Bastide mountain. Keep in mind parking is limited if you are driving, so it’s best to arrive early, especially if it will be a hot day.

The town is 1,400 feet above sea level on the stunning French Mediterranean. It is referred to as the Eagles Nest because of its elevated location. Eze’s population is around 2,000 people.

The area around Eze has had inhabitants are far back at 2000 BC. The hilltop town has passed through man occupations; the Romans, the Moors, Turks, Spaniards, Italians, and the Phoenicians.

It has had much upheaval in its time, including King Louis XIV destroying the fortified wall in 1706 during the War of the Spanish succession. It was not until 1860 that Eze was designated a part of France by a unanimous vote by the people of Eze.

The medieval village and its castle are magnificent, but the view of the Mediterranean sea has made it renowned. No matter how prepared you are for the views, they are even more breathtaking than you imagined. It is a top destination in an area already reputed for its beauty. What made it extra special is the simplicity and genuineness of the town. Being so close to Monaco, it was lovely to see the efforts made to keep its charm, narrow streets, and buildings preserved. The village allows only pedestrians with no car traffic. It can make an arduous walk up a bit challenging but so worth it. I was in a boot after an Achilles tear, so it was not ideal.

Near the parking lot is the Eze tourist office. Stop in and grab a map to help guide your exploration of all the landmarks the town has to offer. As you leave the tourist office, walk up the hill towards the village, where you will see the church on the hill ahead of you, as you enter the streets of the historic center through the postern, a 14th-century gate.

You can begin wandering through the labyrinth of cobblestone streets and alleys of Eze. There are more than you can imagine but make sure not the miss Rue de Barri. It takes you to the beautiful and exclusive Hotel La Chèvre d’Or. Take the time to visit the gorgeous hotel gardens!

The beautiful homes and buildings of Eze had us spellbound; many now are art galleries, shops, and restaurants. Several of the residents are artisans, and the shops reflect that. There were lovely courtyards to meander through and staircases to aid in your climb to the top. I suggest that you take your time and explore every piece of this village time allows.

Planning a trip to France? Check out our France Travel Guide to assist in planning your perfect vacation. Click here

What not to miss

The sites you should not miss include the Chapelle de la Sainte Croix, built at the beginning of the 14th century and the oldest building in the village. The interior is stunning.

There is a Porte des Maures, a gate out of the other side of Eze next to the Chateau d’Eza. A castle over 400 years old that is now a luxury hotel

The streets around Place Francis Blanche are picturesque with many plants and bougainvillea flowers. The small fountains and interesting windows and doorways all add to the village’s charm. I took quite a few pictures of those doorways and windows!

The Notre Dame de L’Assumption church, with its neoclassical façade, sits on the edge of Eze old village was built in the second half of the 18h century. The exterior may not impress you enough to enter, but it has an array of beautiful paintings and frescoes inside.

When you get close to the top of the village, you will see the Jardins Exotique de Eze entrance, which is on top of the ruins of a medieval castle. The botanical garden setting is incredible, offering astonishing panoramic views of the Mediterranean, the French Riviera, and the Italian coast. On a clear day, Corsica is visible. There is an entry fee to the gardens.

Once inside the award-winning exotic gardens, you will find a unique collection of over 400 exotic plants from around the world. The south-facing side of the park has numerous species of succulent plants and xerophytes from all over the world. The north face has plants from the Mediterranean and other humid regions of the world.

The Sculptures of Goddesses

Interspersed within are sculptor Jean-Philippe Richard series of 15 stone statues of ‘earth goddesses,” each with its own poem written by the artist. It adds a poetic element to the experience of strolling around. This stone works of art model Classical Greek sculptures.

The poem on the sculpture of Justin or Isis, the Egyptian goddess of motherhood and fertility, reads:

“You have recognized me…

I am the same

The series of sculptures are interspersed among the succulents and cacti, along with what remains of the castle. The goddesses seemed to take a life of their own on. The artist was able to portray their strength and gentleness at the same time.

The idyllic gardens were beyond our expectations and very unique. The sculptures had a presence to them that captured the imagination. They celebrate femininity and the relationship between the beauty of both the physical and evanescent world.

After all, you are in France

On the way out, we dined at one of the many restaurants and eateries to chose from. It is France, so plan for a leisurely and delicious meal at lunch, even if you only hope for a quick bite.

Of course, wine must accompany that meal. You are in south Provence; chose one from the region to complement your meal.

You can walk to the sea from Eze

Do you want to add some more exercise after that rather tiring trek to the top? There’s a trail down to Eze-sur-Mer, but it will take you more than an hour to hike from the village down to the sea.

Many visitors take the public bus from Monaco to Eze and then walk down the hill to the bus stop at the bottom of the mountain for the return public bus ride.

We only did a day visit, but it would be such fun to spend the night and enjoy all Eze has to offer after all the crowds leave. There are two exceptional high-end hotels, Chateau d’Eza is a 12th-century castle, and Hotel La Chèvre d’Or. Both are very expensive, out of the range for most of us! Other accommodations are less costly in and near the village.

Booking.com provides a list of the hotels within the village of Eze. We have not stayed at any of these, so we can’t vouch for them, so please read the reviews carefully. Click here for the hotel list.

Eze is at a minimum of a 2-hour visit without a break or food. That still won’t give it the justice it deserves. The Jardins de Eze, allowing time to take in the views, would be an hour alone. Start early during the summer months as the heat can be pretty rough during the day. Bring water with you, even if it isn’t hot.

Eze was not on our agenda, but what a find. If in the region, do not miss the Jardins Exotique and the delightful medieval hilltop town of Eze. It is one of my favorite hilltop towns in France, and I have been to a lot!

It will likely steal your heart as it did mine.

Eze, France has an official tourism site, click link below. 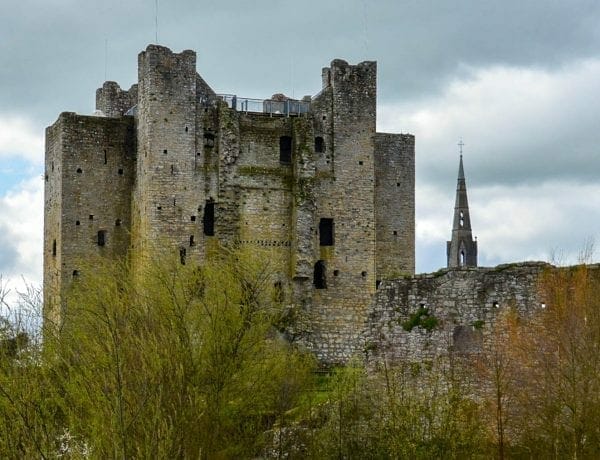 Trim Castle: Where the Magic Began 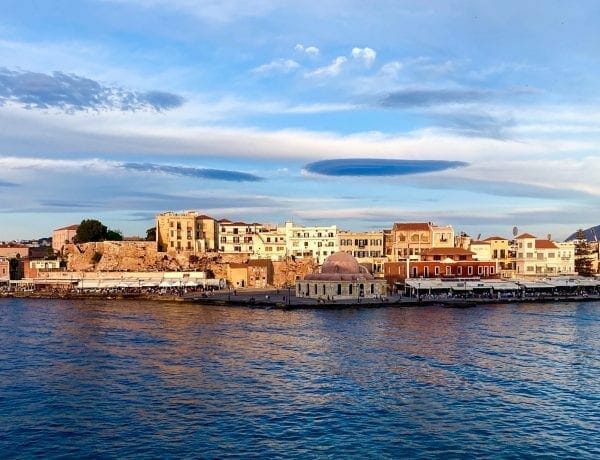 The Colors of Crete